Stumbling on the Unexpected 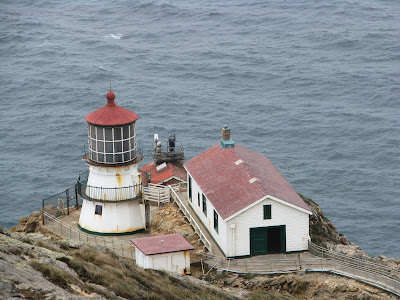 Sometimes when you're traveling, the most memorable times are those when you discover something without any planning at all. Example: the Point Reyes Lighthouse on the California coastline.

During a trip to San Francisco, I remembered hiking in Marin County many years earlier. It was with that in mind, that we decided to drive north with little more than a map to guide us. As the coastline grew wilder and more desolate, the hermit in me fell in love with the area. Finally, feeling as if we should have a destination, I noticed a lighthouse on the map and suggested we make our way their. My father in law loves lighthouses, so we could take some pictures for him.

Just when it felt as if we had reached the end of the world, we came across a small parking lot. Trees had grown horizontally across the path, a testament to the strong winds that beset this part of the coast. We stopped at the small ranger station before heading down the steps to the lighthouse. It was at this point that hubby, a huge film buff, suggested that this all seemed very familiar. Could this be the lighthouse featured in one of our favorite films - John Carpenter's The Fog? Nothing in the ranger station display seemed to suggest this and surely it would be mentioned somewhere?

On we continued, down the two hundred or so steps. The wind picked up, and one could imagine the light of this tiny beacon, sending warning to those out on the rough seas. Incidentally, if you're wondering why the lighthouse was below cliff level rather than on top, it was so the light could be seen below the fog.

After spending a little time exploring and bracing ourselves for the hike back up the steps, we took a few more photos and began the drive back to San Francisco. I decided that, much as I loved the isolation, I could do without the wind. My search for the perfect hermitage continues. We did however feel most satisfied to later learn that this was indeed the site of filming for a highly recommended movie.
Posted by Fiona at 10:03 AM