Picture yourself in the following scenario…. You are in a foreign land where you don’t speak the language and you stand out visually, Japan for example. You have just moved there, not to a big city, but to a small rural area and after your first week, you bravely decide to take the train into the regional city. There is only one train line and it runs right outside your apartment so getting to the city is not a problem. You spend an afternoon wandering around, looking in the shops and taking in the sights, always aware that you, as an outsider, are being stared at. You even end up sharing your lunch with a dreadlocked homeless man in the park, finding comfort in a joint sense of non-belonging. When it is time to go home, you face a problem. There are six train platforms and the maps and directions are all in Japanese. It looks very impressive but you have no idea what any of it means, other than the fact that you can’t get home.
What do you do?
Of course, being an international traveling soul, you don’t panic. You pull out your phrase book, repeat the necessary words in your mind several times and then approach a little old lady, tap her on the shoulder and politely ask for directions. She turns, looks up at you, throws her arms in the air and runs away screaming. “Gaijin!” “Foreigner!”
That was my introduction to Japan.
My husband, who is the same height as me at 5ft 6 liked to say that in Japan he was tall. If he was tall, I was Godzilla, stomping through the mountains of a country that was far too small for me. Looking back at photographs of the local women’s group I taught, I see a row of women who barely reach my shoulders. I tower over them like a giant sumo, ready to pick them off one by one for a snack. I remember trying to buy some slippers once, only to find that delicate Japanese shoes were far too dainty for my gargantuan feet and all that would fit my size 8.5s was a pair of men’s sandals. 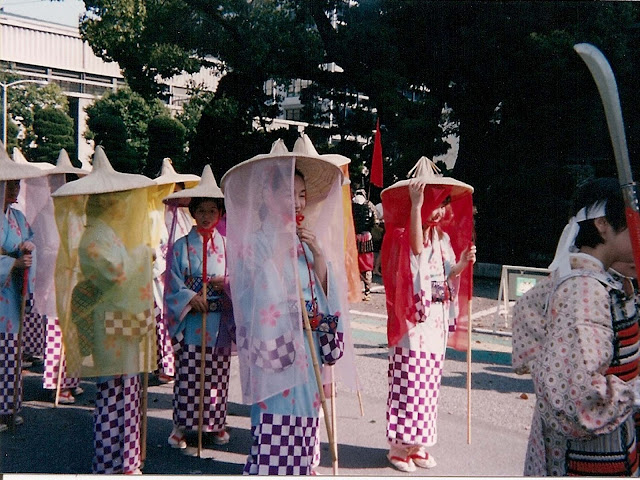 I soon discovered though that being an outsider, an apparently giant one at that, was actually very freeing. Living in a tiny town, people knew my every move – who came to visit, who I visited, what I bought etc. Everything I did was seen as evidence of how Westerners lived. I was asked if I owned a gun because they had seen on TV that all Americans own a gun. As a Western woman, I was considered headstrong, clearly rebelling against my parents since I had moved overseas. (Another assumption was that I would be rather promiscuous, again based on movies and American TV). A gun-toting, rebellious, harlot. In fact, I was an incredibly shy, English girl, just out of college.
So how could it be considered freeing when my neighbors were constantly observing my every move? After a few months of living in my tiny Japanese town, I realized that no matter what I did, everyone would think it was just crazy foreign behavior. When I wore short sleeves in April (before “official” summer weather), I was a strange foreign woman. When I danced on my balcony during my first typhoon, enjoying the rain after the hot, humid summer, I was that eccentric Westerner. When we sang Christmas carols on the train on December 25th, we were crazy gaijin.
If you are going to be considered eccentric or crazy, whatever you do, then why does it matter what you do?
I’m not saying that I behaved irresponsibly, or broke the law, or anything like that, but I did learn to worry less about what others would think.
Sometimes, I was pleasantly surprised by Japanese reactions to my new found freedom as well. An impromptu roadside snowball fight while traffic was backed up in a snowstorm drew cheers from other motorists and a brave few even joined in. When my boyfriend asked for a kiss and I obliged, we were suddenly interrupted by a coach load of middle-aged women who erupted into a chorus of cheers and claps. During my final year there, I traveled with my husband (boyfriend at the time) to Kyoto. After an odd New Years Eve that included a Japanese Country Western bar, and the standard trip to the temple, we came across a choir by an outdoor fountain. As midnight struck, fireworks went off and the choir sang Beethoven’s Ode to Joy. As is typical for Westerners at New Year, my boyfriend and I hugged and kissed, only to find the crowd around us staring in amazement. I hugged one of them and wished them a Happy New Year. Suddenly, one by one, they each turned to their partners and started hugging. We spent the next half hour laughing and drinking hot rice tea with them. The evening remains one of my favorite memories. It seemed that my new freedom was perhaps giving my Japanese neighbors an opportunity to do something a little out of the ordinary too. For just a second, it allowed them to break out of society’s strictures.
Ten years after leaving Japan, I wish I could say that I no longer get embarrassed by anything but that would be a lie. I am far less shy than I used to be thought and I now appreciate the value in worrying a little bit less about what others might think. Who knew feeling restricted could be so freeing?
Posted by Fiona at 6:32 PM

Email ThisBlogThis!Share to TwitterShare to FacebookShare to Pinterest
Labels: Japan