Back in the CCCP

Those of you familiar with the Cyrillic alphabet will know that CCCP stands for Сою́з Сове́тских Социалисти́ческих Респу́блик (or as we know it, the USSR). The Soviet Union may be long gone, but its varied peoples and cultures live on.


In the past decade or so, Thanet has seen a large influx of asylum seekers, refugees, and immigrants from the former Soviet nations, but it was during my recent trip back to England that I really saw evidence of their culture putting down new roots. Two trips to weekend markets revealed stalls selling baklava and other Eastern European pastries, but it was a casual walk from my parent's house to town which offered the greatest revelation - a parked car emblazoned with advertising for CCCP, a new restaurant. Ever eager for a new culinary experience, I stopped by with Nic and my parents for lunch on New Year's Eve.


The restaurant itself is fairly small, and seems to have been segmented into three tiny rooms, no doubt a result of adding on more space as the neighboring properties became available. The television played what appeared to be a form of talent show, with small children singing alongside a group of grannies in traditional garb. We were mesmerized.


In chatting to our waiter/barman/owner, we discovered that the restaurant was owned by Belarussian immigrants. He was keen to make suggestions regarding the menu, and we were eager to follow his advice. Mum and I each had the wild mushroom soup, followed by a shared Farmer's Snack platter of bread, meats, and pickles. Much as I love mushrooms, my previous experience of mushroom soup was limited to something from a can. This freshly-made soup, however, was delicious - creamy, full of flavor. Nic, realizing that this may be his only chance to visit the restaurant during his trip, decided to try the Wild Boar, while my dad had the pork fillet. We all had nothing but praise for the food. And to drink? Despite the extensive selection of vodka and brandy, we knew that we would be celebrating New Year later and so chose to wash everything down with giant mugs of kvass, a bread beer which has an overwhelmingly yeasty smell but a surprisingly refreshing flavor. 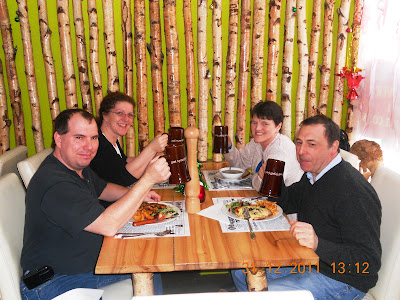 After posing for a pic (they like to post pics of their happy customers on their Facebook page), we were off on our merry way again, bellies full of good food and ready to tell everyone that they needed to cast aside their images of borscht and cold potatoes to visit CCCP for some delicious cultural education.