Exploring and a Complicated Issue 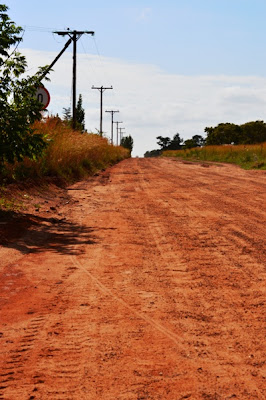 Today, before it got too hot to enjoy my day off, I went on a very pleasant five mile walk, doing the loop around Hammanskraal. I had been hoping to see some springbok; Ethan saw them the other evening on his run. No springbok for me but plenty of emu. (I know emu are Australian but it seems they are raised here by some people too).

It was actually an interesting walk. A very long straight dirt road the entire way, but it gave me a chance to see some of the properties. One thing that struck me is the wariness about security. Every property is surrounded by locked gates, bars, electric fences, dogs, security signs, or some combination thereof. When Jo was away for a few nights last week, she asked Stevie and Josie over to stay to keep an eye on the place. We’ve also been warned against wandering out alone at night, having heard stories of machete-wielding men who roam the veld after dark, just looking for properties or people to rob, hence the seemingly extreme security measures around many properties.

Clearly it is unusual to see a white woman out walking. I saw very few people, but the few trucks that passed slowed down to offer me a ride.

These landowners seem to be primarily Afrikaans, the white South Africans of Dutch or British origin. Race is incredibly complicated here, with Afrikaners  Afros (black), and coloreds (mixed race). Even twenty years of so after the end of apartheid, there is still a marked separation between the groups. Sadly, I’ve had little opportunity to really mix with any locals, other than Astrid and Marni at the bar, and the occasional hello with Gracie, Solomon, and Sydney, who work on site at IPR. It’s a shame as I would love the opportunity to sit down with some South Africans and have an open conversation about race relations here, but it seems an impolite or sensitive subject to raise with anyone.