I've Been to Eden


Chimp Eden that is, and it was every bit as rewarding as I expected. 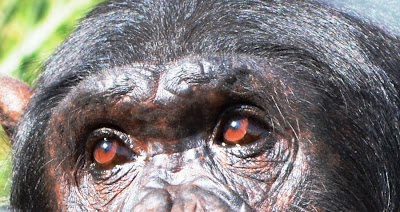 And sorry to be a tease but this is the only photo you get to see; I need to do a little editing work to get rid of wires.

Since I was on a 10am tour with 35 French people and our guide Jason has to pause to allow the translator to do his thing, the tour lasted beyond the usual hour, giving me more time to observe the chimps. Obviously Nina and her baby are off limits, and the top enclosure, where the chimps have the least human contact, is also not included in the tour. But we had plenty of time to see the lower and middle enclosures. I got to finally see several chimps that I recognized from the show that used to be on Animal Planet, including the elderly Joao (60-something years old) and Cozy. Poor old Cozy. A life that has included being born in a lab and experimented on multiple times, and then being taken to Italy where he was castrated and forced to wear tight jeans, has left him with brain damage, some hip displacement, and a lack of status within chimp society. (Having been castrated, he is no threat to the males and ranks below everyone). Nevertheless, he has plenty of character as he attempts to make up for his defaults. To their credit, the other chimps sort of take him as he is, leaving him to his own devices but stepping in when he gets hard to handle.

After the tour, I was met by Executive Director David Devo Oosthuizen, who started his career as a wildlife photographer and now has a job I envy greatly. He then introduced me to Gill, in charge of planning the Sanctuary's new volunteer program. I was thrilled when she asked if she could pick my brain, since I had just come from a volunteer program, and so we chatted about her ideas (which sound great) over lunch.

As I drove down to the main road, I found the road blocked by a troop of baboons. It seemed an excellent end to the day that I had been looking forward to for months.