My knowledge of dams is strictly African in focus - we learned about the Aswan High Dam years ago in school. But it seems that Hoover Dam is something that you should see if you're in the Vegas area so off we went in SuperBug.

A work colleague had warned me before going not to wear rubber-soled shoes. Apparently when she had gone several years before, her mother's flip-flops melted in the heat. As if I would wear flip-flops anyway! But while we're on the subject of heat, this was the first real day that I was out in the full sun (much of the drive to Area 51 being just that - a drive in a comfy air-conditioned car). I had not yet adjusted and so was not on my A-game at dam. Big dam. Water. Damn it's hot! Definite kudos to Bullfrog Sunscreen though. My pale English skin burns very, very easily. A trip to the beach in Hilton Head several years ago resulted in second-degree burns, despite layers of SPF 50. We picked up some Bullfrog spray to try for this trip, since Nic had heard it was used by soldiers in the desert. Not one burn. I've finally found a sunscreen that works!

Back to the dam. 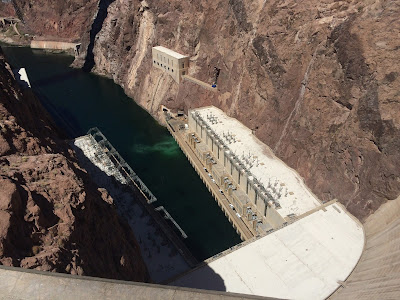 How about a few nice historical facts for non-US readers:

Originally called Boulder Dam, it was constructed between 1931 and 1935, and straddles the Arizona-Nevada border. It was officially dedicated as Hoover Dam by FDR in 1935.

Cost some $49 million to build and more than one hundred workers died during its construction. Despite what you may hear, there are no bodies in it. The concrete was poured one foot at a time so chances are they'd have been noticed! 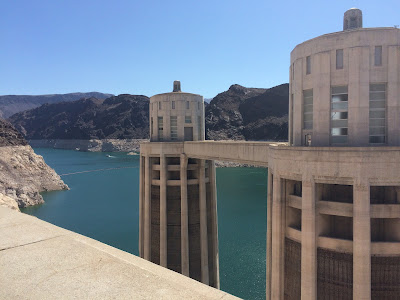 That beautiful azur-colored water you see is Lake Mead. And it truly was the most stunning color. The water level was also VERY low, a reminder of the drought conditions facing much of the Southwest and California.

When at maximum capacity, Lake Mead is the largest reservoir in the US; that hasn't happened since 1983.

In fact, just yesterday, a story ran on CBS about how the decreasing water levels are revealing some interesting historical sites.


We spent some time walking around atop the dam, taking plenty of pics, making sure we didn't lose our ballcaps in the wind, and Nic making a good show of representing his home state. He also took a few shots over the edge, gingerly leaning with his iPhone.

Eventually though, the strong sun was a touch too much. (Oh how I miss it now!) So it was back to the car and off into Boulder for a very nice (but huge) lunch at the Southwest Diner, followed by exploration into Arizona. But you'll have to wait to read about what we found there until later in the week.

Until then, I leave you with a few more pics of the Hoover Dam and Lake Mead. 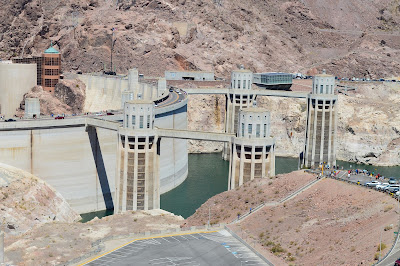