Originally, I was going to write one piece about the mining towns we encountered during our recent trip to Nevada, but I soon realised there was one problem. I have too many photos that I want to share. The desert light was just so perfect.
And so this is going to be a two-part post, both parts rather photo heavy.

I don't recall where I first saw Chloride, AZ mentioned, probably one of those tourist magazines that are in the hotel rooms. Whatever the source, I was intrigued by its description as a "living ghost town". That sounded like a place I needed to visit.

Chloride dates back to the 1860s when the mining camp first formed. Although the camp was named for the silver chloride mined there, a number of other minerals were also dug out of the nearby rock, including gold, lead, copper, and zinc. By the turn of the 20th century, railroads came through the town and business was booming. At its peak, the town's population was 2000. By the time World War II rolled around, the area's mining had already declined significantly, in part due to a lack of a workforce and the increasing costs of extracting ore.

Yet somehow Chloride has kept going, no longer as a mining town, but now as a small community of 250 or thereabouts. And the town definitely has a funky vibe that gave me the impression: if you're going to live in a place like Chloride, you need to have a certain degree of eccentricity.

As we turned off the main highway down to the isolated community, the first thing I saw was a coyote dashing across the dusty road to disappear behind a mass of cacti. Yep - this was not Kentucky.

Our first stop was the Chloride cemetery, in keeping with my tradition of visiting out of the way burial grounds. This was unlike any burial ground I have ever seen.

Although a section was marked off as the original historic cemetery, there was little to be seen, the harsh, dry desert air having worn away most of the headstones. Instead, we browsed rows of more recent graves, decorated with flags and all sorts of monuments, from a simple bunch of flowers to a cornucopia of nic-nacs, as if they had simply moved the contents of Great Aunt Marge's curiosity case from her house to her tomb. It had personality, to say the least.

From the cemetery, we headed into town, unsure what to expect. At weekends the locals put on fake gunfights and reenactments for tourists, but we were visiting on a sleepy Monday afternoon. We circled the two or three small blocks of houses, trailers, and yard art before deciding that the heat was leaving us quite parched. There was a small grocery store/market/tourist office but Digger Dave's clearly looked like the place to go.


The titular Dave was not around but the lady sitting on the porch told us to go on in and feel free to browse and take photos.

We had walked into a treasure trove! Every square inch of wall and ceiling was covered - album covers, concert programs, random rusted implements - why throw something out when it could be used for decoration. In the corner of the main bar, AC-DC blasted from the jukebox. Next to the bar was a sign requesting that only girls under 4ft 7inches dance on the bar - it was a low ceiling after all.


After giving us a chance to wander and explore, the lady from the porch came in. As she got us each a beer, she introduced herself as Maria. She had come to live in Chloride some 13 years ago. She pointed out the story of Digger available for us to read, and then left us to return to her spot on the porch. 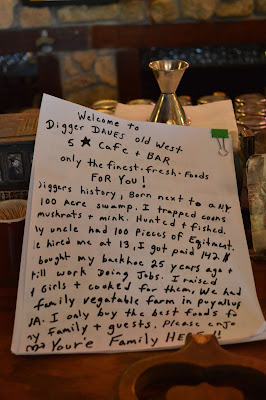 Dave, it seems, had come to Chloride via New York and Washington states. He still hired out his backhoe services to local construction projects. I marveled at how most people we chatted to in these small towns had moved from elsewhere.

If we're ever back in the area, we'll be sure to stop back by Digger Dave's.

Following Maria's advice, we stopped by the visitor's office to pick up a map of the town. Outside of town is a series of murals by artist Roy Purcell. However, we were advised that our SuperBug may not be up to the off-trail drive and so we had to content ourselves with admiring photos.

With map in hand, we explored on foot, stopping by the old jailhouse, the former rail depot, and the other sites of town.

I wish I'd had a chance to stop by Digger Dave's in the evening to chat to some locals. I'd love to know who lives in Chloride, what they do, and how they came to be there. Those would be some stories indeed.