There is no shortage of places to eat in Vegas' Fremont Street area, from quick to cheap to pricier to the ever-present all-you-can-eat buffet. I ate wonderful shawarma here, some of the best fries and sausage sandwiches (the beer garden at The Plaza), award-winning pizza... and then there was one of the worst meals I've ever had.

Their slogan may be "Food You'll Die For", but that is not because the meals served at the Heart Attack Grill are so good. Quite the opposite. I should preface this by saying that I am a health and a food writer, and so eating here left me feeling so incredibly conflicted/ disgusted/ oddly fascinated. But my husband really wanted to go and so we did.

This is a grotesque celebration of obesity, gluttony, and bad food, with a fair dose of sexism thrown in.


Upon arrival, the wait staff (dressed as sexy nurses) give you a hospital gown to wear during your meal. The walls of the restaurant are covered in TVs playing stories about rising obesity levels in the US and one of their regular customers who died of a heart attack. But let's face it, if you're eating here, you know what you're getting into.

The menu is limited in variety but not in size. My husband, being a lover of a good milkshake, ordered a chocolate one. No he didn't want a heavy dose of vodka in it. It arrived topped with a pat of butter. He described it "not a milkshake but a giant dose of soft-serve." If you happen to be vegan and somehow ended up here (why?!) your menu is limited to a choice of cigarettes.

Not wanting fries or a burger (you can have up to 8 patties and 40 slices of bacon), we both opted for the 1/2 pound coronary dog. We figured we wouldn't eat dinner that night, and honestly, we couldn't face it.

This is somewhere you eat (hopefully) purely for the novelty value so good quality food was not high on my list of expectations. Even so, this managed to plummet lower. The sausage was ok and you can't mess up an onion. But add a stale bun, Velveeta cheese, and canned chili that bears a strong resemblance to dog food (which I wouldn't feed my dogs). There's your meal.

Now there is one additional caveat to the experience. If you do not finish your meal, you will be spanked. Since my pure stubbornness says I would rather punch out a waitress than let her touch me with a paddle, I finished my entire dog, something I spent the rest of the day revisiting. Let's just say that chili "taste" keeps coming back. Hubby was spanked.

Bottom line: by all means go. I know it may sound odd that I'm saying that but go for the experience. Go for the vacation novelty factor. Go to remind yourself that salad is a wonderful thing. We've been. And now we never have to go back. 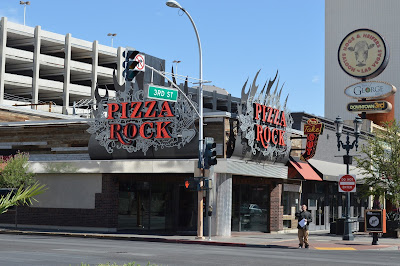 A much better meal - dare I say it, the best meal we had in Vegas - was a simple pizza. I like pizza but it's something I rarely eat unless I make it myself. I am not a fan of the overly greasy delivery fare on a crust that is either so thick it is still raw and doughy, or something so thin it is little more than a potato chip. But Pizza Rock is your source for good, nay, excellent pizza. We stumbled upon it by accident while looking for somewhere to eat, and they were just turning away a group of 12 for lack of room. Luckily, though, they had a table for the two of us.

The chef, a California native, has an impressive array of accolades to his name, not least of which is the 2007 World Champion Pizza Maker at the Pizza World Cup (there is such a thing) in Naples, Italy. He was the first American and the first non-Neapolitan to win. If this guy can impress the Italians, I want to try his pizza!

The menu is differentiated by types of pizza - American, Neapolitan, Sicilian, etc - and by the type of oven and oven temperature. Although the Sausage and Stout was tempting (only 23 are made each day), we decided to try the Cal Italia, Gold Medal Winner in the Food Network Pizza Champions Challenge. The crust was perfect, neither too thick nor too thin. On top: Asiago, Mozzarella, Gorgonzola, a fig preserve, prosciutto, Parmesan, and a balsamic reduction.

It was, in short, pizza heaven. If I lived nearby, I would probably eat much more pizza. Instead, I may have to settle for one or two of his books.