It's been a while since I've posted about my beloved primates. No I didn't jet off for a quick trip to Africa, but I did stop off at Cincinnati Zoo on the way back from Indianapolis. The gorillas weren't feeling particularly sociable but I did spend some time watching the bonobos, and snapped a few pics. 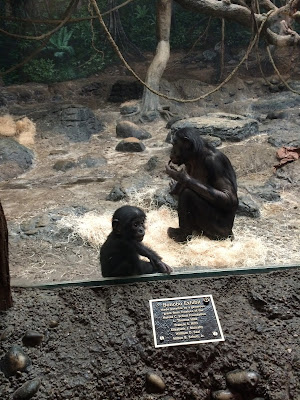 Nic snapped this pic to the left. I was further down, watching from my own quiet spot, away from the main crowd and the usual irritating comments and monkey noises! They're not chimps. They're not monkeys. 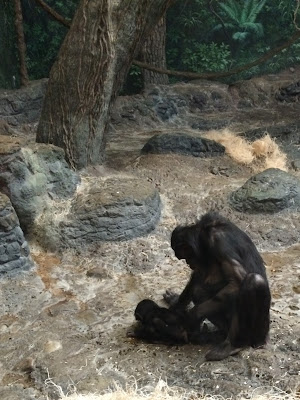 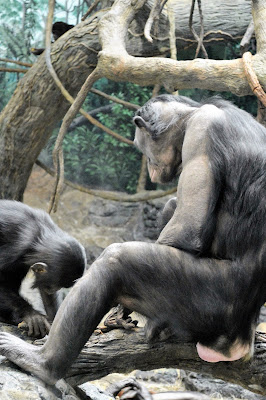 Eating Our Way Around Indy

I've been to Indianapolis a few times, but usually just as a stopover on my way to Chicago. While I've raced around the Indy Speedway, enjoyed the works of Georgia O'Keeffe at the Museum of Art, and toured the Medical History Museum (highly underrated and well worth a visit), I've not spent much time exploring the local restaurants. So I was pleased to head up there this past weekend for a food and walking tour. We ate and ate, and then ate some more. It turns out that Indianapolis has some great food!


Our tour started at 3pm at The Rathskeller, where we were greeted by our guide Dani.

The German House was built by the city's German community in the 19th century. Its goal was to provide one location for their many social, political, and sporting clubs. Renamed the Athenaeum during World War I, the building now houses a YMCA, several theatre companies, and many other organizations. It is still home to the Rathskeller restaurant and beer garden. 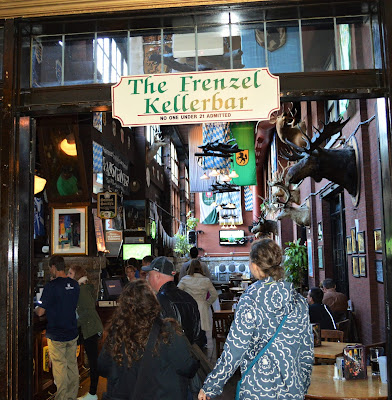 Heading inside, we took our seats in the large event hall, ready for the first portion of our feast. I have never had a light German meal, and this was no exception. In addition to the beer of our choice, we were treated to plates of fresh pretzels, complete with two types of mustard, one of which gave the sinuses a good cleaning!

Then came the serious food - a plate featuring our types of sausage, sauerkraut, rotkraut, and spaetzle.

It was all delicious. I had fully intended to pace myself, having read the reviews of the tour and knowing that we had more food stops ahead of us. Let's just say once I tried the food, all hopes of pacing vanished.


Following our hearty German sampler was an opportunity to walk off some of our recently ingested calories with a stroll through the historic Lockerbie Square. Here Dani shared the history of the many charming houses in the neighborhood.

One stop along our route was the James Whitcomb Riley Museum Home. Famous poet James Whitcomb Riley, creator of Little Orphan Annie, lived in the home as a lodger for several decades. We were shown around the first floor, and I fell in love with the highly polished and very impressive stove. I believe if I were to rip out all of the appliances in my tiny kitchen, I may just have room for such a beast.

The tour's second food stop was Ralston's DraftHouse on Massachusetts Avenue. At 4pm on a Saturday afternoon, the place was a-hopping.

In an effort to pace myself, I decided to skip the beer. (I had heard that the margaritas at our next stop were not to be missed). However, Nic ordered a cherry mead ale that was as full of flavor as it was color.

The dishes provided for us on this stop consisted of two types of flatbread and sweet potato fries.

The Peachy Pig was topped with pulled pork, cheddar, ginger, cilantro, and a peach-chipotle reduction. The combination of pork and peach is one that I plan to do myself on a homemade pizza.

I was a little more reserved about the Ratatouille Flatbread... until I tried it. Usually ratatouille is one of those-take-it-or-leave-it dishes for me, overly swimming in stewed tomatoes. This was far beyond my expectations, with the perfect blend of eggplant, peppers, onions, squash, and tomatoes, topped with cheese.

The sweet potato fries were a tasty side, and came with ketchup and cinnamon cream cheese.

I could have happily spent more time at Ralston's soaking up the atmosphere, but we had more exploring to do, and so on to the next.

After admiring the architecture of the Murat Centre and stopping to say hi to Kurt Vonnegut, we continued our way along Massachusetts Avenue to Bakersfield.

Before I mention Bakersfield, I should note some of the benefits of doing a tour like this. Obviously, the food is a highlight; you get to try samplers at places you may not have tried before. You also meet a fascinating variety of people, and have the added bonus of a knowledgeable guide to tell you the history of the area. But another benefit is that you have a table waiting for you. Take for example Bakersfield. They do not take reservations and on a Saturday evening, they are filled to the gills. They do keep a space for a tour though, meaning that we were able to walk right in and find the food ready and waiting.

Aiming for a vibe similar to its namesake city in California, Bakersfield prides itself on three things: tacos, tequila, and whiskey. Dani had told us about the excellent margaritas and she was not wrong. It may well be the best margarita I have ever tasted, surpassing the ones I had in Mexico and even the ones at my favorite local Mexican restaurant. If you find yourself in Indy, go and order a margarita at Bakersfield, stat!

To accompany our drinks, we were presented with platters of chicken and fish tacos, both delicious.
The fish was particularly surprising. All too often, I come across fried fish that has gone soggy. These pieces of fish were firm with a crisp batter. Very nice indeed.

And finally, we reached our last stop: The Flying Cupcake bakery. Given my choice of cupcakes, I picked out a bananas foster but took it with me for later enjoyment. For now, I was stuffed.

So how would I rate the tour? Excellent. Dani was a wonderful guide. Each of the food stops was a delight. If I had to pick a favorite dish, I would probably say it was the Peachy Pig, but that is a tough call, because I did enjoy everything. I actually can't wait to go back to Indianapolis to revisit some of my new food discoveries.