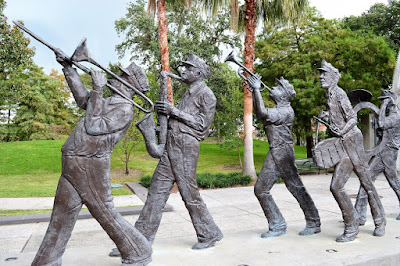 There's no going to New Orleans and ignoring the music. Why would you want to? The city is a vibrant combination of color, life, and sounds. This is a place where, if you can pull together a band and $50 for a license, you can have a parade for any reason. Seriously! If I lived there, I'd be finding all sorts of reasons to party. Sunny day? Let's have a parade. Feeling blue? Time for a parade to lift the spirits!

But while many people associate New Orleans with jazz, there is so much more variety to the musical history of the Big Easy. It is the very heart of American music.

One of the best ways to learn about the musical history of New Orleans is to take a walking tour. French Quarter Phantoms does a fabulous musical tour of the Treme neighborhood. (We weren't paid to say that - we took a number of their tours and enjoyed every one.) Our group set out with our trusty guide Justin and a boombox of tunes for a neighborhood discovery that ranged from the drumbeats of the Congo to Marilyn Manson (yes - there's a New Orleans connection).

Obviously I encourage you all to take the tour so I'm not going to give away everything, but I will share a few of the highlights to hopefully whet your appetite. 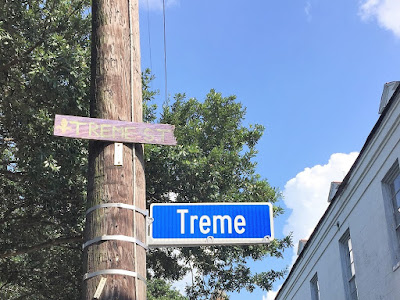 So let's start with a little history about the Treme neighborhood. This beautiful collection of streets with the brightly colored houses is adjacent to the French Quarter. It is also the oldest African American neighborhood in the United States, and as such, has a rich history that encompasses civil rights, the arts, social change, and of course music. It was the earliest place where free people of color were able to buy and own property. The streets may have been quiet the afternoon of our tour, but at weekends they are filled with local musicians and residents.

Our tour began in Louis Armstrong Park, more specifically in Congo Square. Here, under the rules of the Code Noir observed by the French colonists, slaves met each Sunday. Their dances, rhythms, and songs, transported thousands of miles, provided inspiration for generations of future musicians.

The park is full of sculptures commemorating New Orleans music, but they might not all be what you expect. For example, the French Opera House Sculpture. While you might not put opera and New Orleans together, a magnificent opera house stood in the French Quarter from 1859 to 1919, when it was destroyed by fire.

Nearby, you can also see statues of Charles Buddy Bolden, Big Chief Tootie, and the park's namesake, Louis Armstrong.

As we learned from Justin, after the Civil War, many musicians found themselves back in New Orleans. They would take the military marches and add the drum rhythms handed down from Africa and the West Indies. Jazz was born. Although opinions differ as to exactly who started it and when. Some will say Buddy Bolden in 1895. Others will claim it developed later. In reality, there wasn't just one person on one day. Jazz formed from an amalgamation of styles, instruments, traditions, and creative souls.

There is so much more I could write about this - about the Second Line, about how music continues to evolve to this day in New Orleans with groups such as the Rebirth Brass Band, about how trumpets continue to sound around the city in a seemingly never-ending stream of music festivals, and about how artists in so many other genres come to Treme in search of inspiration. And that doesn't even get to the local hip hop and metal scenes.

But as much as I could talk about it, the best way to experience it is to visit New Orleans. Take a guided tour through Louis Armstrong Park and Treme. Hear the stories. Hear the sounds. It may sound corny, but this city is ALIVE with rhythms and tunes, and all have a story to tell.

In case you can't tell, I sort of fell in love with New Orleans, especially Treme!