(Note: The following is by no means an attempt to explain voodoo in full. There are many excellent books on the subject for those interested in learning more. When visiting New Orleans, be aware that voodoo is a spiritual belief system and should be treated with respect.)

It is almost impossible to separate voodoo from New Orleans history and the modern-day culture. They are all intertwined, meaning that you would be missing out if you do not attempt to understand some of the voodoo religion and its continuing influence over the city.


Louisiana voodoo developed as an amalgamation of traditional religious practices brought by slaves from West Africa and the Catholic religion which the local landowners and settlers followed. Slaveowners tried to make their slaves convert to Catholicism. Like so many other aspects of New Orleans culture, religious beliefs combined, bringing together various backgrounds to create something unique to the region.

The most famous practitioner was Marie Laveau, the daughter of a white planter and a black Creole. While working as a hairdresser, she developed a reputation for being able to cure sickness, unite lovers, and bring luck to clients. Her customers ranged from the wealthy white elite of the city to slaves and the impoverished. A strict Catholic, she encouraged many of her followers to attend Mass, and it may have been this that helped to cement the link between the two systems.

Today, although voodoo has become very commercialized in New Orleans, used to sell all manner of trinkets to tourists, it is still an important belief system. Many stores in the French Quarter can provide good luck charms, dolls, and advice. 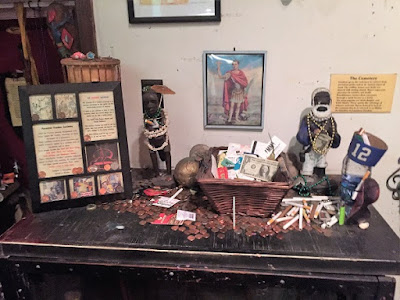 A good place to learn more is the New Orleans Historic Voodoo Museum on Dumaine Street. Visitors can learn about local tours, or can book readings with practitioners. They can also browse the museum which, while small and often crowded, contains a wealth of information about Marie Laveau, voodoo's origins, and its links to Catholicism. Again, be aware that many of the displays are altars and should be treated with respect. They may look very different to a Christian church altar, but each item carries significance.

The other key place to visit is the tomb of Marie Laveau in St. Louis Cemetery #1, aka the City of the Dead. Since 1789, thousands upon thousands of people have been buried in this small burial ground, which barely covers one city block. Since 2015, the cemetery has been off limits to unaccompanied visitors. This is to cut down on vandalism which sadly has caused lasting damage. Those wishing to visit may do so as part of an organized tour, such as the one we took with French Quarter Phantoms.

The cemetery is absolutely fascinating but most people want to see Laveau's tomb, where people still leave small offerings. You will notice that one her tomb and, more prominently on several other tombs, dozens of Xs have been etched into the stonework. DO NOT DO THIS! Tour guides back in the early 20th century started a rumor that Laveau was in fact buried in a different tomb and that if visitors scratched XXX into it, they would gain good fortune. This brought the guides larger tips from eager visitors, while causing irreparable damage to the tombs. Show respect to the dead rather than desecrating their resting places.

Incidentally, the story of how people are buried in New Orleans is incredibly interesting but I shall leave that for you to learn from your guide.